I think it's fair to say that most people in modern affluent societies don't often steal posessions from others. However there is a theft that I observe frequently in this kind of society - one that's less obvious and yet a theft no less - headspace theft.

A few years ago my husband and I went on a holiday to Spain. We spent a couple of weeks on an organised back packing tour initially, to get our bearings, before going it alone for the rest of the month. On this tour was an incredibly irritating woman - let's call her Gillian. Gillian seemed to subscribe to the belief that 'I speak, therefore I am'. She seemed to think that unless she was talking she didn't exist. At first I thought it might have been nerves at meeting the new group of people with whom she was about to spend a couple of weeks travelling. She was in her 50s and travelling alone - she might have been trying to fit in. It continued relentlessly for the whole two weeks.

Over the time we travelled with this group I felt very conflicted. On one hand I could see that she was desperately lonely and hungry to belong. On the other she was exhausting, dull as dog poo and entirely self absorbed. On one 5 hour bus trip we were unlucky enough to be seated in front of her. She was sitting next to a young woman who was a vet and we could hear their conversation. Before a half hour was up we knew the name and breed of every dog she and every one of her family members had ever had, what they were like, what they would and wouldn't eat, every ailment that had ever befallen them, what they died of and where they were buried. Finally the young vet managed to get in one (interesting) story and not two minutes into it we could hear Gillian's camera clicking - she'd finished talking so was taking photos out the bus window.

It didn't take long before even our most patient, 'nice', accommodating fellow travellers perfected the art of avoiding her as we left our accommodations on our 'free' days. There was strategic positioning on buses, trains and dinner tables to get away from her. I found myself starting to be rude to her to try and get the message through as it was almost a physical pain to me to be unable to let my brain rest. (The photo below is me and my fellow travellers being talked at...'Gillian' is out of view.) 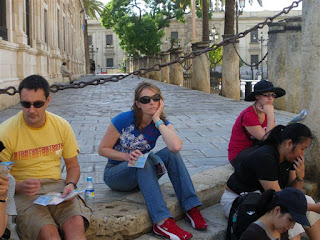 It was like Gillian had an invisible one way mirror all around her - everything was a means of seeing her own reflection and no information or feedback from outside got in. I don't know if it was that she didn't know how to have real dialogue or she was just so desperate for attention, to feel seen. Either way the net result was she had few relationships and those that were patient enough to be with her did so out of charity, not out of a desire to be with her. She talked herself into a lonely bubble.

While this is an extreme example of a headspace thief, they are not a rare breed. I can think of several of them on the periphery of my life. They are generally partners of friends as, like most people, left to my own devices I give headspace thieves a wide berth. But what has this to do with the dharma?

One of the principles for living that the Buddha suggested (in the noble eightfold path) was to take from others only what is freely given. That probably sounds a bit like 'thou shalt not steal' but the Buddha wasn't into shoulds and shouldn'ts, much less trying to control people with shalls and shan'ts. He was into observing closely and seeing what leads to happiness and peace and what leads to less good stuff, then choosing your actions accordingly. So this principle is an insight he shared about what helps a person towards peace and happiness and what doesn't.

If we take my Spain story as a case in point and observe closely the cause and effect at play, we can see that Gillian was definitely taking from all of the people around her, a resource (headspace) that was not being freely given after the first 10 minutes of her acquaintance. This might have relieved Gillian of the confronting possibility of facing her own demons should silence fall. Having listened to many hours of her stories my perception was that her primary demon was loneliness and she was very scared of it. So she gorged herself constantly on others' time and attention, regardless of whether they were offering it, and the net result was a state of disconnection from others which ironically fed her demon.

Teenagers steal headspace from each other all the time as they try to build a sense of belonging by bouncing their self-images off of each other and having them accepted. I remember doing it myself - listening to my friend talk about herself and communicating a sufficient amount of interest to earn the right for her to listen to me... talk about me. If she listens and sounds interested or approving then that's a sign that I'm accepted......aaah.....safe.

However we expect that maturity brings less neediness on this front and an interest in and ability to truly attend to the humanity experience of others. Where this progression has stalled, as in the case of Gillian, it speaks of a demon that is ripe for facing. I have loads of patience and compassion for people who are practicing the courageous act of demon-facing, but much less for headspace thieves who are robbing from me to feed their demons.

If you're interested, here are a few questions to do a self-check on the extent to which you might be a headspace thief. As an interesting exercise, you could answer these for yourself, then ask a good friend who is likely to be honest with you (your partner if you have one?), what their answers are regarding your behaviour. If you find you are frequently thieving, try deliberately not doing this (the questions below also serve as some ideas on how) and then see what comes up for you - what feelings, fears, experiences - this will help point you in the vicinity of your hungry demon:
Of course what I haven't spoken about here is the flip side - generosity with headspace....for another day.
Posted by Lenore Lambert at 5:59 PM