Grief - up close and personal

Some people won't get this. Four days ago we had our 14 year old dog euthanased and we've been grieving ever since. Some people get love of animals and some don't. I used to think the inability to love a dog was a character flaw but I've since known a few lovely humans who've been a bit shy about dogs so that theory's fallen by the wayside. Even if you don't get dog-love this post is about the grief process so it's relevant. All meetings end in separation so it's an experience we all share. Many times. 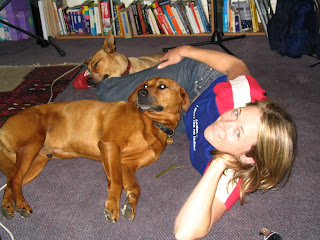 The past 4 days have been extremely painful. I don't think it's possible to love dogs more than I love/d mine. We could have let him live a few more days or a week but he had stomach cancer and he was on his way out. We decided to keep him alive with drugs until he stopped having fun or was in significant pain. Last Friday he stopped eating. He'd already lost a third of his body weight. It was time to let him go. Letting him go is one of the hardest things I've ever done.

One of the beautiful things about practicing the dharma (the teachings of the Buddha) is that every single experience you have is grist to the mill - an opportunity to practice. For some time I've been curious about grief because my Dad died a couple of years ago and I wasn't all that affected by it. I felt empathy for him because his death was a slow one in which he became increasingly unable to deal with anxiety or excitement - a difficult state to be in when facing death. I really felt for him. But I wasn't very sad because he wasn't very involved in my life. Plus I'd already done my grieving when I accepted him as he was rather than as I wanted him to be. So the only time I cried was when the hearse drove him away from the church. My loneliness demon rode in on the coat-tails of that experience - he was leaving the party to go and be on his own forever. But that wasn't about Dad. That was my loneliness demon.

So here I am two and a half years later sobbing for days about my beautiful Buddy Brown. At least I know I haven't had what Barry Magid calls a 'spiritual lobotomy'. I want to share some of my observations of this experience and relate it to a key question in the dharma - one which I think needs to be up front and centre when people are exploring it. That question is whether the dharma, and awakening in particular, are about detaching from life or whether they are about engaging with it. The answer is that they are very much about engaging with it. Not indulging the ups and downs or being engulfed by them, but definitely the dharma is about embracing the life experience and getting to know it intimately.


My top 10 observations of the grief process: 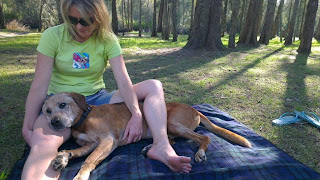 Cuddly right to the end - on our camping trip
the week before he died.

10. Connecting with others helps. Matt observed with curiosity that one of my natural responses was to text a number of friends and family about Buddy's death a few hours after it happened. He asked why I did that. It was interesting to reflect on it. I said I thought it was probably a way of letting people who care about me know that I needed their love and support. It was also because several of the people I texted knew Buddy, had cared for him at different times, and loved him. Since then I've sent out a tribute email to our wider group of friends and family with a link to some photos. This email showed how much he meant to us. Replies, calls, empathy and warm wishes have flowed in ever since. It's felt quite nurturing. Matt commented just tonight what a positive difference it's made.


The question: is dharma practice about detachment?
This is an idea that can turn people off the dharma - people who relish the beauty and joys of life. It's also an idea that can attract people to it - people who are looking for the spiritual lobotomy I spoke of...a way to avoid feeling life's pain. In Barry Magid's fabulous book Ending the Pursuit of Happiness, he relays his experience of many Zen students dropping their practice when they realise that it's a practice of engaging with your own patterns, your own demons, rather than running from them. As Stephen Batchelor says, unlike religions, the essence of dharma practice is confrontation rather than consolation - quite the opposite of detachment. What I've described above is dharma practice - being fully present to your experience.

The Pali canon is the earliest and most accurate version of the Buddha's teachings we have. Nowhere in the canon does it mention becoming detached from life. It speaks of non-attachment, but that's very different. Non-attachment is about accepting that good things come and go rather than desperately trying to make them a permanent and singular feature of your life's landscape. The times when I accept that Buddy is in my past, when I am present to my current experience rather than wishing it were different, I feel at ease. The times when I focus on the absence and wish that my dead dog were still with me, I suffer.

However being non-attached doesn't mean not feeling the love I felt for him or the joy at his being. These are beautiful things and the dharma doesn't suggest we should not engage with the beauty and joy in life. Dharma practice is about 'the whole catastrophe' and engaging with it fully requires great doses of courage, gentleness and love not least to ourselves. These qualities are needed both to face the pain but also to hold the beauty and joy lightly because the nature of everything is temporary.

The Buddha was once asked whether indeed the whole of life is suffering as one interpretation of his first noble truth (or his first important thing as I like to call it) would have us believe. He replied that if this were the case we wouldn't run about desperately clinging to our experiences as we do. In these past few weeks I've wondered whether we should re-write the first important thing to be 'there is joy and there is suffering'. That's our reality, experienced no more vividly than when we are face to face with temporariness.
Posted by Lenore Lambert at 12:54 AM